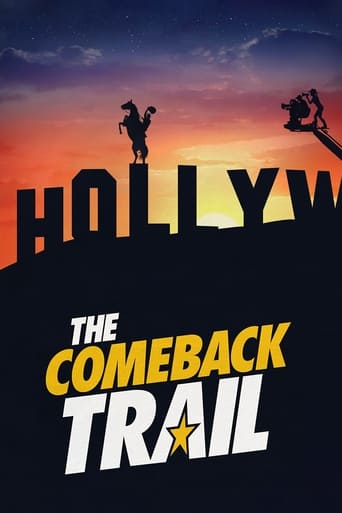 The Comeback Trail 2021 DVD Cover. After his latest film bombs, Producer Max Barber creates a new film, all to kill his lead, Duke Montana, in a stunt for insurance. But when Duke is unable to be killed in a basic stunt, Max puts him into more dangerous situations.

In debt to the mafia and in desperate need of a new money-making plan to save his life, corrupt grind-house film maker Max Barber (Robert Deniro) agrees to make a risky new film for the sole purpose of murdering his lead star in a stunt for the insurance money.

Max never wants Duke Montana (Tommy Lee Jones), an elderly, washed-up movie star, to be revitalized by being in front of the camera again as he casts him as the lead.

Max raises the ante after failing to kill Duke in a simple stunt. He places Duke in more risky circumstances. And as Duke pulls off trick after stunt, Max unwittingly begins to make his best film yet.

THE COMEBACK TRAIL is a lively trip through the underbelly of Hollywood that is a cross between “Get Shorty” and “The Producers.” It will make you laugh with its ensemble of unforgettable and outrageous characters.