The Croods A New Age 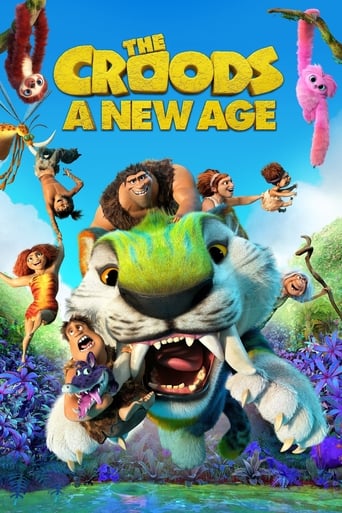 The Croods A New Age (2020). Searching for a better living conditions, the Crood family finds an enclosed, well-protected idyll Unfortunately, they must also learn to live with the Betans. Tensions arise between the new neighbors cause the tribes to draw strength from their differences, push them together, and help them survive the war.

Guy’s parents died when he was a child, as seen in a flashback. They tell him to look for a place named ‘tomorrow’ while they drown in tar. He embarks on a long journey in search of it, and along the way, he meets a young Belt, whom he takes along for the trip.

The Croods A New Age (along with Guy and their pets Chunky and Douglas) are still looking for a place to call home some time after the events of the first film, escaping several dangerous creatures along the way. Grug is continually frustrated by Eep and Guy’s blossoming relationship, and it only gets worse when he overhears them discussing settling down somewhere other than the Croods.

Grug marches away, enraged, and then comes across a huge wall, which he leads the entire pack to. As they break through the wall, they find a vast expanse of land dotted with fruits and lakes, and they believe they have finally found a place to call home. They are easily trapped in a net and released by the landowners, a couple named Phil and Hope Betterman. When the Bettermans meet Guy, they discover they have known each other since Guy’s parents died.

The Croods A New Age are welcomed as house guests by the Bettermans, who introduce them to their daughter and Guy’s old pal, Dawn, who instantly befriends Eep. Grug’s life with the Bettermans degrades as their evolved lifestyle rubs off on his family, such as Thunk becoming addicted to watching things from their window (similar to a television) and them sleeping in separate beds rather than together, and the Bettermans soon reveal themselves to be biased against the cave family because of their destructive nature, believing that Guy is better off.

Phil eventually takes Grug to his underground man-cave (a sauna-like location hidden behind some waterfalls), where he convinces him that Guy should abandon their pack. Hope also irritates Ugga by passive-aggressively suggesting that they leave while Guy stays with them.

Eep and Dawn use Chunky to leave the land and leap over their wall for a joyride that ends with Dawn being stung by a bee and her hand swelling up.

Guy chastises her for her irresponsibility when Eep returns her home, ending with him insensitively calling her a “cave-girl.” Tensions between the parents, Guy and Eep, rise at dinner, particularly when Dawn’s swelling is revealed.

The Croods A New Age plan to leave in the morning because they’ve had enough, but Guy decides to stay after a fight with Eep. Due to Grug and Ugga consuming a bunch of bananas that the Bettermans have prohibited Grug from eating, the land is soon invaded by ‘Punch-Monkeys’ (monkeys with human-like strength).

Phil reveals that he sends the Punch-Monkeys bananas every day to keep them away from the Bettermans, but since Grug and Ugga ate them, the Punch-Monkeys become angry and abduct Grug, Phil, and Boy, taking them to their homeland.

Thunk, Ugga, Eep, Gran, Sandy, Belt, Sash (Dawn’s pet sloth), Hope, and Dawn try to save the guys, but they end up trapped on an island full of Dog-Spiders.

During their time together, Hope grows to embrace the Croods and finally forms the Thundersisters (a girl-group Gran used to be in when she was younger) to mount a rescue, revealing that Gran’s hair was just a fuzzy bat in the process.

They’ll need a replacement now that the bananas are gone. The monkeys make Grug and Phil battle gladiator-style to see who will be the sacrifice, and when they’ve exhausted each other, they share their bitter feelings, making Guy regret what he said during his and Eep’s fallout.

The monkeys soon disguise all three men as bananas and give them as sacrifices to the giant Punch-Monkey.

Grug and Phil apologise for their bad behavior and for putting pressure on Guy, but just as they’re about to be devoured, the Thundersisters appear and save them.

Guy and Eep reconcile on a giant skull-chandelier, and use it to kill the giant Punch-Monkey by cutting the ropes and sending it crashing into the abyss below, where it catches Eep’s ‘peanut toe’ (which she uses as a prosthetic limb) and takes it off, allowing the families to flee.

With their differences resolved, the Bettermans allow the Croods to live as neighbors on their property, with Guy realizing that Eep is his ‘tomorrow,’ and the two quickly move into one of the Bettermans’ bedrooms together, and Grug finally accepts his daughter leaving with Guy.

Is The Croods A New Age available for streaming?

Yes, on Spectrum On Demand.

Where can I buy The Croods A New Age?

Is The Croods A New Age available for download or renting?