The French Dispatch Black And White 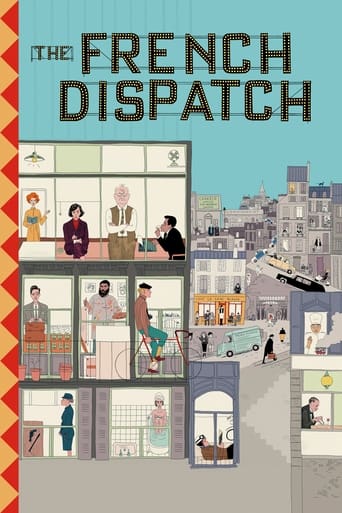 The French Dispatch Black And White 2021 DVD Cover. The staff of a European publication decides to publish a memorial edition highlighting the three best stories from the last decade: an artist sentenced to life imprisonment, student riots, and a kidnapping resolved by a chef.

From the visionary mind of Academy Award® nominee Wes Anderson, THE FRENCH DISPATCH brings to life a collection of stories from the final issue of an American magazine published in a fictional 20th-century French city.

On the occasion of the death of its beloved Kansas-born editor Arthur Howitzer, Jr. (Bill Murray), the staff of The French Dispatch, a widely circulated American magazine based in the French city of Ennui-sur-Blasé, convenes to write his obituary.

Memories of Howitzer flow into the creation of four stories: a travelogue of the seediest sections of the city itself from The Cycling Reporter; “The Concrete Masterpiece,” about a criminally insane painter, his guard, and muse, and his ravenous dealers; “Revisions to a Manifesto,” a chronicle of love and death on the barricades at the height of student revolt; and “The Private Dining Room of the Police Commissioner,” a suspenseful tale of drugs, kidnapping and fine dining.