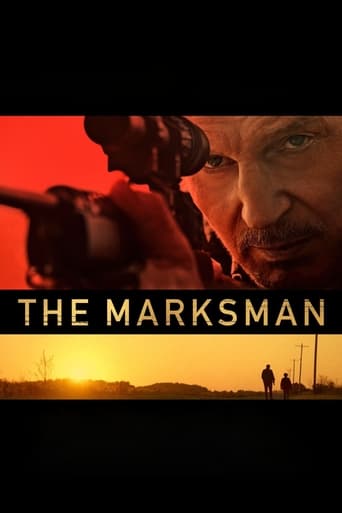 The Marksman 2021 DVD Cover. Jim Hanson’s quiet life is suddenly disturbed by two people crossing the US/Mexico border – a woman and her young son – desperate to flee a Mexican cartel.

After a shootout leaves the mother dead, Jim becomes the boy’s reluctant defender. He embraces his role as Miguel’s protector and will stop at nothing to get him to safety, as they go on the run from the relentless assassins.

As he fights eviction notices and struggles to make a living on an isolated stretch of borderland, hardened Arizona rancher Jim Hanson (Liam Neeson) just needs to be left alone.

Rosa begs Jim to take her son to safety to her home in Chicago after being trapped in a shoot-out. Jim sneaks Miguel out of the nearby US Customs and Border Patrol facility, defying his stepdaughter Sarah (Katheryn Winnick), and the two hit the road with the gang of killers on their tail.

As Mauricio and his fellow assassins blaze a cold-blooded path, Jim and Miguel gradually resolve their differences and begin to form an unexpected friendship.