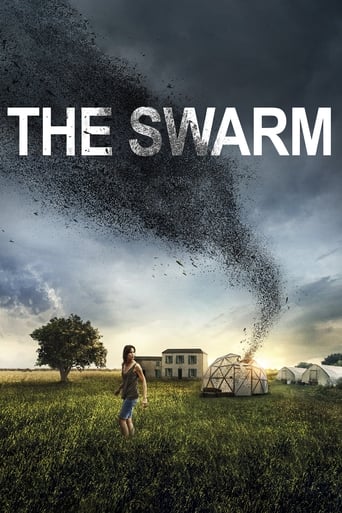 The Swarm 2021 DVD Cover. A single mother raises grasshoppers as a high-protein food source, but she has difficulties reproducing them until she discovers they have a thirst for blood.

Virginie Hebrard (Suliane Brahim), a single mother, raises a swarm of edible locusts (grasshoppers) on her farm in order to sell them in the market and support her two children, Laura, an adolescent, and Gaston, a little boy.

Virginie is deeply in debt since she is unable to breed the requisite number of locusts for selling. The amount decreases with each passing day, and insects seldom lay eggs. Karim, a viticulturist with whom she has a love affair, loans her money to help her family survive. Virginie, on the other hand, is self-righteous and wants to work for herself and pay off the debt as quickly as possible.

Laura persuades her mother to sell the farm and relocate since her dreadful locust breeding has made her a laughingstock at college. Virginie, on the other hand, initially dismisses the concept, but as the horrors of bankruptcy near, she loses her mind. Virginie crushes her homemade Geodesic Dome in a fit of rage, injuring her hand in the process.

She later discovers that locusts have been feasting on her spilt blood and have begun to produce healthy eggs. Virginie’s morals is afflicted by a wave of greed as the number and quality of locusts grows, and she resorts to unscrupulous methods to produce them.