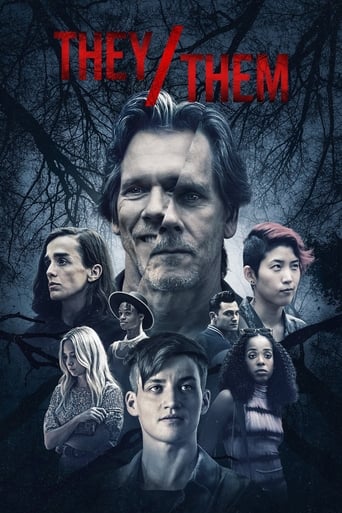 They/Them 2022 DVD Cover. Campers at an LGBTQ+ conversion camp endure unsettling psychological techniques while the campsite is stalked by a mysterious killer.

Whistler, a gay conversion camp, has been in operation by the same family going back generations. Currently, the camp is operated by Owen Whistler and his wife, Dr. Cora Whistler, played by Kevin Bacon and Carrie Preston respectively.

There’s a small staff of four, other than the Whistlers. An activities director named Amy, her gay-conversion camp alumni turned athletics director boyfriend Zane, the groundskeeper Balthazar, and Molly the camp counselor who uncovers the horrors of Whistler Camp at the bequest of camper Jordan.

A fifth employee emerges as a decoy within the campers. Suddenly, employees are picked off in a murder streak by an unknown assailant.