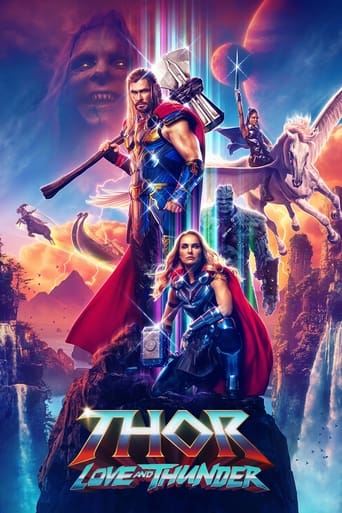 Thor Love and Thunder 2022 DVD Cover. After his retirement is interrupted by Gorr the God Butcher, a galactic killer who seeks the extinction of the gods, Thor Odinson enlists the help of King Valkyrie, Korg, and ex-girlfriend Jane Foster, who now wields Mjolnir as the Mighty Thor.

Together they embark upon a harrowing cosmic adventure to uncover the mystery of the God Butcher’s vengeance and stop him before it’s too late.

After the events of Avengers Endgame, Thor now sets off on a personal journey of discovering who he is through inner peace. But now Thor is called back into action once more when he takes on a deadly new adversary named Gorr the God Butcher, who seeks the extinction of all the gods.

To face this new foe, Thor teams with Korg, Valkyrie, and his old flame Jane Foster who surprisingly has been bonded with his old hammer Mjolnir.