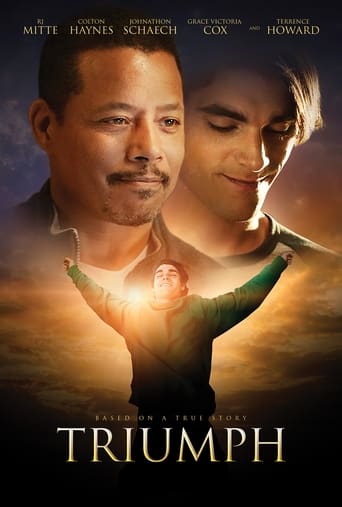 Triumph 2021 DVD Cover. A brilliant and motivated youngster with moderate cerebral palsy aspires to make his high school wrestling team and win the heart of a classmate, the lady of his dreams.

Triumph is a 2021 wrestling drama based on scriptwriter Michael D. Coffey’s actual experience of overcoming his disability. It’s a genuinely wonderful and uplifting picture, despite the fact that it suffers from all of the typical underdog sports clichés.

Mike, a cerebral palsy child, is first seen as a 9-year-old engaging in a wrestling bout in the narrative. He loses and breaks his collarbone, thereby ending his wrestling career.

After that, we jump ahead ten years to Mike as a senior (RJ Mitte) in the 1980s, who is receiving physical treatment to enhance his mobility. He enters a new school and faces opposition from the teachers on his first day because he wants to take tough subjects that include weightlifting in addition to difficult sciences and maths.

Mike demonstrates that he has the mental acuity to take his classes by enrolling in a weightlifting class in the hopes of rekindling his wrestling ambitions, much to his overprotective father’s chagrin (Johnathon Schaech).

Mike walks into the school gym and, after assisting with his weights, befriends jock Jeff (Colton Haynes), who is already a member of the wrestling team and hopes to get a college scholarship. Mike also befriends and falls in love with Patti (Grace Victoria Cox), a fellow literature student. Despite establishing friends immediately, Mike is soon subjected to bullying and nasty remarks from other pupils, notably Troy, a fellow wannabe wrestler.

He goes to his weightlifting class and tells Coach Cutting (Terrence Howard) about his desire to wrestle; nevertheless, the Coach tries all he can to discourage Mike from pursuing such a difficult and agility-based sport. Mike refuses to give up and instead accepts the Coach’s weightlifting challenge, which will allow him to participate in the wrestling tryouts if he succeeds.

Mike eventually proves everyone wrong with his hard work and dedication in his quest for wrestling, despite tragic and unanticipated occurrences.