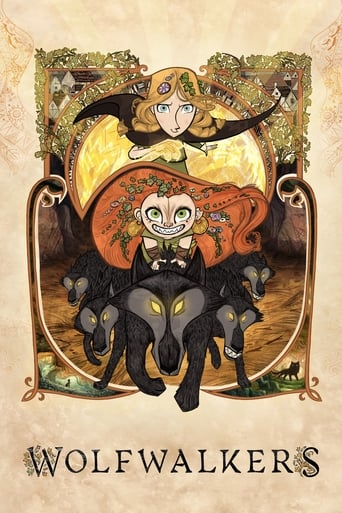 Wolfwalkers 2020 DVD Cover. In a time of superstition and magic, when wolves are seen as demonic and nature an evil to be tamed, a young apprentice hunter comes to Ireland with her father to wipe out the last pack. But when she saves a wild native girl, their friendship leads her to discover the world of the Wolfwalkers and transform her into the very thing her father is tasked to destroy.

Residents of the town of Kilkenny in 1650 Ireland are attempting to clear nearby forests for farmland on the orders of Lord Protector Oliver Cromwell, placing them at odds with a pack of wolves that live there. The Lord Protector has summoned Hunter Bill Goodfellowe and his young rebellious daughter Robyn from England to Kilkenny to help exterminate the wolves so the woodcutters can resume their work unhindered.

Robyn plans to sneak out of town one day with her pet falcon, Merlin, to join Bill because she dislikes the confining atmosphere of Kilkenny and wants to help him. Robyn watches as a mystery girl carries Merlin back into the woods with the fleeing wolves after inadvertently shooting Merlin with her crossbow while attempting to kill a wolf attacking a shepherd and his sheep. Robyn is chastised by the Lord Protector for not working in his scullery, and Bill is given two days to kill the wolves.

Robyn manages to escape back into the woods while being escorted back to Kilkenny by the Lord Protector’s guards, where she discovers Merlin has miraculously recovered. After that, she is confronted by a young wolf, who leads her into a cage. When Robyn tries to fight the wolf when it tries to free her, the wolf bites her on the face. Robyn is led back to the wolves’ den by Merlin and the wolf, where she learns that the wolf is the same strange girl from earlier.

Mebh, the young lady, refers to herself as a “wolfwalker,” and she heals Robyn’s wound “until it’s too late.” When Mebh and the other wolves lead Robyn out of the den and into the wild, the two girls learn more about each other and bond over their shared desire for independence. Robyn also discovers that Mebh’s mum, Moll, a wolfwalker, has yet to return to her pack’s quest for a new home. Bill rejects Robyn’s attempts to persuade him of the presence of wolfwalkers and her hopes for a peaceful way to rid the woods of the bears, angry at her defiance of the Lord Protector’s instructions.

The next morning, while serving her first day in the scullery, she is pulled into the Lord Protector’s chambers by a strange voice and the wolfwalker magic in her bitten shoulder, where she discovers a huge hidden cage but is soon escorted out by the head maid. When sleeping that night, Robyn discovers that her spirit has fled her body and turned into a wolf, turning her into a wolfwalker and causing her to leave Kilkenny. When Mebh returns to the jungle, she is overjoyed to hear of Robyn’s transformation and assists her in acclimating to her current form, which includes her enhanced senses of scent, sound, and speed.

Robyn tries to return to her human body upon her return to Kilkenny, but is attracted to the identity of another wolfwalker, who she believes is Moll. Robyn manages to infiltrate the Lord Protector‘s manor, where she meets Moll, after eluding the terrified townspeople, including Bill. Despite assurances from Moll that Mebh is unharmed, Robyn is told by Moll to tell Mebh to leave the woods with the pack that it is no longer safe for them.

Bill is given one final opportunity to rid the forest of the wolves before being demoted to a foot soldier in the Lord Protector’s army, and he promises the townspeople that he can tame the wolf he’s trapped, and by implication, nature itself. Robyn’s pleadings to let Moll go and to declare her a wolfwalker are ignored by the Lord Protector, who dismisses them as “pagan nonsense.”

Robyn and Bill go through their daily routines, fearful of being separated from each other. Mebh infiltrates Kilkenny herself in search of her mother, waiting for Robyn to return on a promise made the night before. Robyn tries to relay Moll’s message about taking the pack and going with them, but Mebh, hurt by Robyn’s reluctance to assist in the rescue of her mother, resolves to do so on her own. The Lord Protector then shows a muzzled and handcuffed Moll to the townspeople, whom Mebh and Robyn observe.

When Bill tries to contain her, Moll pops the muzzle and bites him on the shoulder, angered Mebh storms the stage and tries to free her. Mebh is forced to escape after re-entering Moll’s enclosure, but not before pledging to return with her pack to save her mother. Before joining him and his army to fight the wolves, the Lord Protector orders Bill to destroy Moll. Robyn saves Moll from Bill before releasing her and reuniting her with Mebh before attacking Kilkenny with her pack, winning Mebh’s forgiveness. 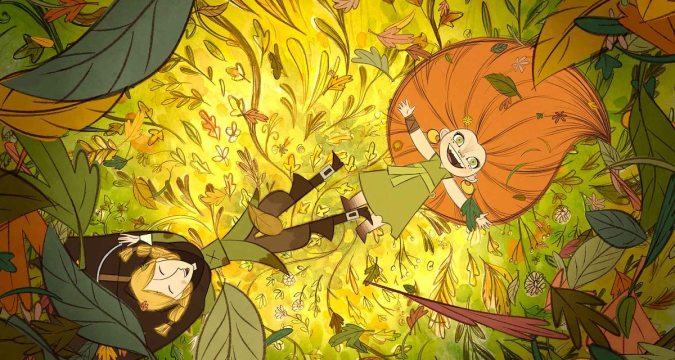 Bill appears and shoots Moll in the face, fearing for Robyn’s life, even after he sees Moll’s wolf body transform into a spirit and leave the den, with Mebh and the wolves trailing behind. Just as the Lord Protector and his army arrive and begin razing the trees, Robyn turns into her wolf form and follows them. When Mebh is attempting to cure a severely injured Moll, she sends her pack to join Robyn, who guides them to strike and hold the army at bay in order to keep the army from reaching Mebh and Moll.

Mebh calls Robyn and her pack back because she realizes she wants them to cure Moll, but Robyn is trapped in the explosion of a cannon ball attack and is left behind. Robyn thwarts yet another cannon assault on the den, but suffers an injury as a result. Due to Moll’s bite, Bill transforms into a wolfwalker and fights the Lord Protector in his wolf shape before the Lord Protector can kill her. Bill defeats the Lord Protector and catches him over the side of a cliff above a waterfall with the aid of Robyn in her human form.

The Lord Protector accepts his fate and dives headfirst into the craggy rocks below.

Robyn and Bill make it back to the den and assist Mebh and the pack in reviving Moll, who welcomes Bill and Robyn to stay with them and adopt their new identity as wolfwalkers.

Robyn, Mebh, Bill, and Moll then ride in a wagon pulled by the Lord Protector’s horse to find a new home with their pack. Bill places a flower in Moll’s fur, and Mebh and Robyn fall asleep in the back of the wagon, their wolf shapes circling it.