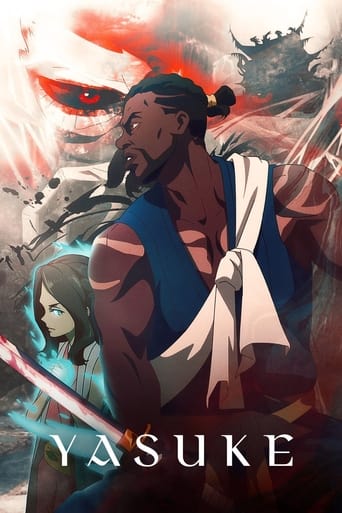 Yasuke Season 1 DVD Cover. Yasuke, the greatest ronin ever known, strives to sustain a peaceful existence after a past life of bloodshed in a war-torn feudal Japan filled with mechs and sorcery.

When a nearby village becomes the focal point of civil upheaval between warring daimyo, Yasuke is forced to take up his sword and carry a mysterious boy who is being hunted by dark powers and bloodthirsty warlords.

Yasuke transports us to a parallel reality in 16th century Japan, aided by technology and magic. Yasuke was a knight under the orders of Lord Oda Nobunaga in 1528.

Just until he sees him die in a fight against Yami no Daimy, a supernatural warlord. Since the defeat of Nobunaga 20 years later, Yasuke works as a fellow boatman under the name of Yassan, attempting to ignore his history as the ronin “Black Samurai.”

He spends his days drinking, eating, and assisting others who are traveling by river.

He runs into Ichika and her daughter Saki at a bar one day. Saki appears to have mystical and powerful abilities, but she is afflicted with illness.

When unidentified mercenaries arrive to attack both of them, Yasuke intervenes. Taking up the sword once more, he is charged with returning Saki to her home and arranging for her to be examined by a doctor.

In the middle of this, he encounters flashbacks from his previous life as well as challenges and fights with Yami no Daimyo’s mercenaries.